How to Manage Users and Groups on Ubuntu 22.04 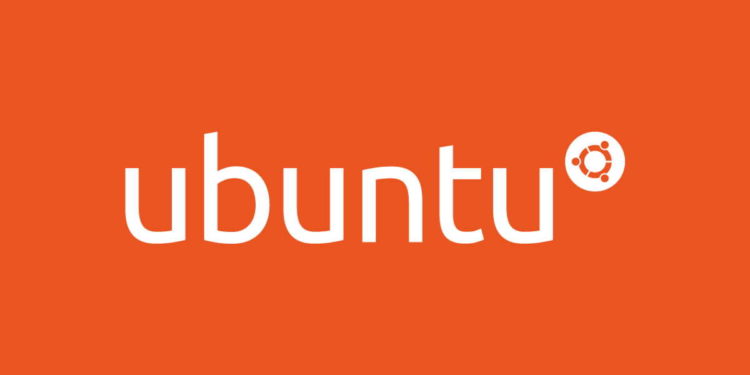 Linux is a multi-user and multi-tasking operating system. User and group management are the two most important tasks to be performed by Linux administrators.

In Linux, each user has their own login name and a home directory. Every user belongs to a primary group, and users can be added to multiple secondary groups. All users in the group will have the same group permission on files and folders. This makes it easier to provide permission for multiple users.

This tutorial will demonstrate how to manage users and groups in the Linux system.

The command-line tools to manage the users and groups in Linux are:

adduser / useradd: To add a user

addgroup / groupadd: To add a group

deluser / userdel: To delete a user

We will cover the practical examples of all commands in this article. To follow the tutorial, you will need to switch to the root user or any user with sudo privileges.

You can add a new user to the system using the adduser command. The following command creates a new user henry in the system.

It will prompt you to enter the password for the new user and other user details. 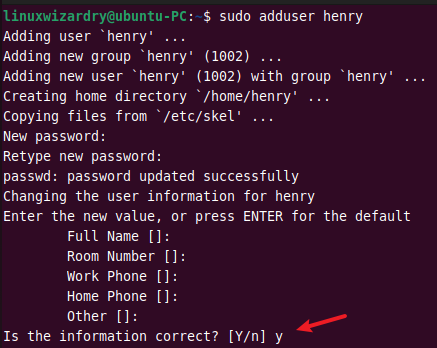 To verify the user, you can try to log in as a new user.

The /etc/passwd is a plain text file that stores the user account information in Linux. You can use the cat command to view the content of /etc/passwd. 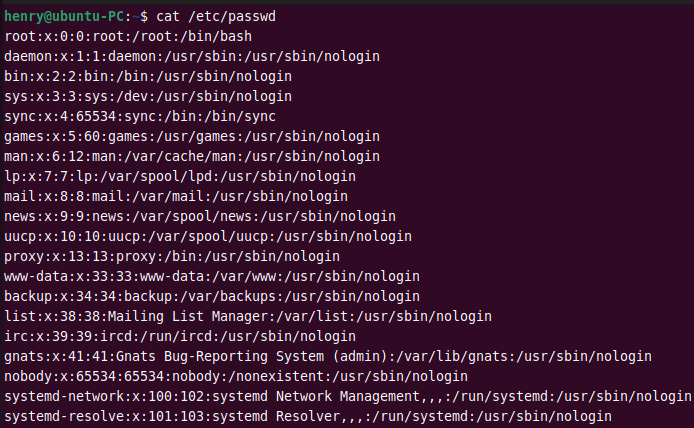 Each user has one entry per line. The fields are separated by a colon : symbol and contains the following information.

The new entries are saved at the end of a file. To find a user henry, you can see the last entries. Alternatively, you can use the grep command.

3. Change the login name of a user

You can use the usermod command to change a user’s login name in Linux. This command renames the user henry to james.

As you can see, the username is changed to james.

4. Change the user ID of a user

By default, the system automatically sets the next available UID when creating a user. The usermod command with -u flag can be used to change the UID of a user.

The following command changes the user ID of james to 4567.

5. Change the group of a user

The specified group must already exist in the system.

In Linux, a user can have only one primary group. But you can assign a user to multiple secondary groups. The -G flag allows you to specify the secondary group for a user.

The following command adds a user james to the group ubuntu.

6. Add a user to the sudoers group

You can add a user to the sudoers group and provide sudo privileges to that user. This command adds a user james to the sudo group.

The -a option adds a user to the group without removing the current group.

Next, log in as a user james and run the sudo command to confirm.

The passwd command is used to change the user’s password in Linux. The following command changes the password of a user james.

When the user account is not needed, you might want to delete it from the system. The userdel command helps to remove a user in Linux.

The below command deletes a user james from the system.

9. Delete a home directory of a user

The usedel command without any flags only removes a user. It does not delete the home directory of a user in the /home directory.

To delete a user along with its home directory, you can use:

You can add a new group to the system using the groupadd or addgroup command. The following example creates a new group computer on the system.

The /etc/group file stores the group details in a list. Each entry contains the following group information for each group.

You can display the entries in /etc/group file with the cat command. 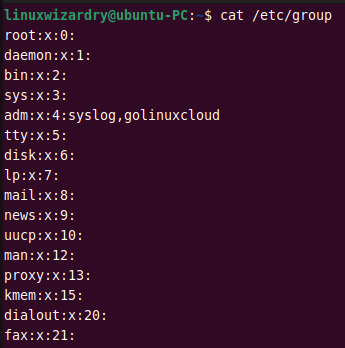 When creating a new group, the system assigns the next available group ID by default. You can change this behavior and specify a GID for a new group with the -g flag.

The following command creates a new group bank with a custom group ID 644.

14. Remove a user from the group

Sometimes you might need to remove a user from the secondary groups. You can do it by specifying the username and group to the deluser command.

The below command removes a user rohan from the group ubuntu.

You can remove a group from the system using the delgroup or groupdel command.

To delete a group ubuntu, run the following command.

We hope you found this article helpful. Please let us know if you have any confusion about any examples in the comment section below.

How to Install and Set up a Django Web Framework on Ubuntu 22.04 LTS

How to Install Plausible Analytics on Ubuntu 22.04

How to Install Plausible Analytics on Ubuntu 22.04