Rsh Command with Examples in Linux 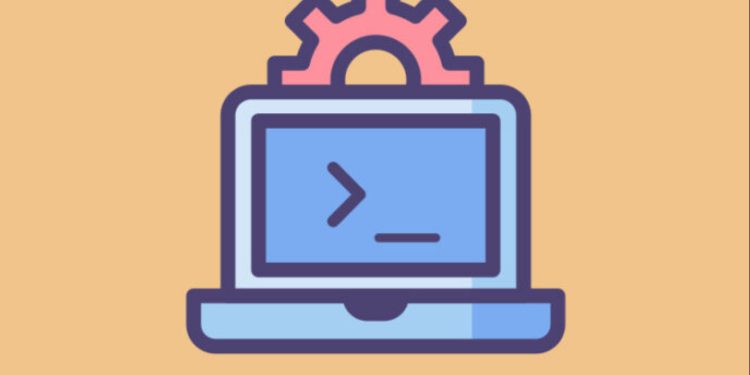 The rsh command is one of the older commands in UNIX/Linux. It allows you to execute commands on the remote machine from the local machine. You do not have to log in or switch users in the remote system to run commands. rsh connects to the remote host and executes the specified commands.

In this article, we will explain how to use rsh command and execute commands remotely in Linux.

Run the following command to install rsh command on your Linux system.

Syntax to use rsh command

The basic syntax for rsh command is as follows:

To follow along with this tutorial, you will need an Ubuntu system with a non-root user having sudo privileges. The commands described in this tutorial have been executed on the terminal of Ubuntu 20.04 LTS. The same commands can be used for other Linux distributions.

Before you start using rsh command, you will have to make the below changes in your local and remote systems.

You can use the nano command to edit the file content. You will need the sudo privilege to edit the /etc/hosts file.

In the local user’s home directory, you have to create a .rhosts file and add the login name of remote users which will be used to log in to the remote computer.

Suppose you have two users linuxhint and kali in the remote computer having an IP address 192.168.56.102. Then you have to add the below lines to a .rhosts file in the local user’s home directory.

Similarly, you have to add the login name of the local users in the remote user’s home directory.

If you have a user linuxhint in the local machine, you have to add login names to .rhosts file in both remote user’s home directories. 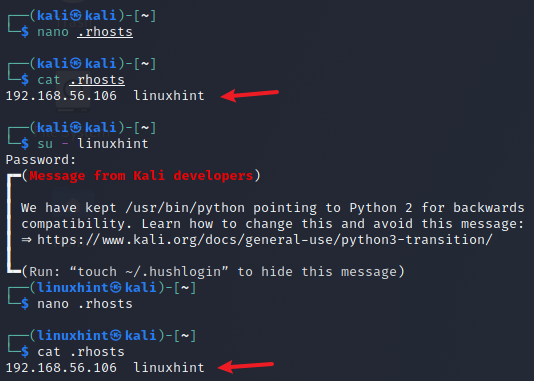 Login to a remote shell

If no command is specified to execute in the remote host, you will be logged in on the remote shell with rlogin.

The following command will launch the terminal session on the remote host kali as the same user on the local machine.

It will prompt you to enter the password of user linuxhint on the remote host. 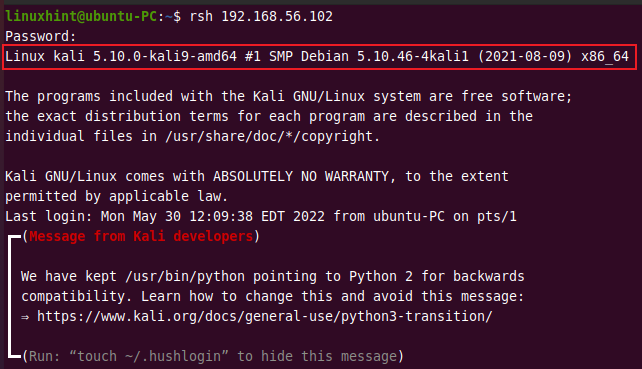 To exit the remote session, execute the exit command.

Run commands on the remote computer

The hostname command displays the computer’s hostname in which the command is executed.

The following command executes the command hostname on the remote computer.

The rsh command exits after the remote command is terminated.

Run commands as a different user

The above examples use the same username as the local machine to connect to the remote host, i.e, linuxhint.

You can specify a username with the -l option to log in as a different user.

The following example executes the whoami command on a remote host as a user kali.

The ls command lists files and directories of the current working directory, which is the user’s home directory by default.

You can run multiple commands on the remote system by separating them with semicolons ; or && symbols. But you have to put commands in single '' or double quotes "".

If the multiple commands are not enclosed in single or double quotes, then the first command will execute on the remote host and others on the local machine.

For instance, to run pwd and ls command on a remote host, you can type these commands on your local system.

As you can see, it displays the working directory and lists folders inside it.

When using the && separator, the second command will only work if the first command is run successfully.

Run commands with sudo privileges on the remote system

Some commands in Linux require sudo privileges to execute, like adding or removing users, installing or removing packages, viewing the root directory, etc. By default, rsh command does not ask for the sudo password and shows the error saying the password is required.

You have to use the flag -S with sudo command to prompt for the password and read a password from the standard input.

This command runs the remote script file seq.sh from the local system.

For running local scripts on the remote system, you have to use the following syntax.

Suppose you have host.sh file in the local computer which contains the below lines.

Then you can execute a local script on the remote system by issuing the following command.

Save the remote system’s output to the local system

Save content of the remote file to the local file

Append content of the remote file to the local file

The following command runs cat new.txt on a remote host and appends its output to the previously created local file hello.txt.

You can use the rlogin command or rsh without no commands to log in to the remote host.

On the remote terminal session, you will be able to execute interactive commands.

By now, you should have understood how to use rsh commands in Linux. rsh is intended to be replaced by the ssh command. rsh is not secure as it does not use any encryption for data transfer. ssh is highly recommended for a secure connection. The command-line use of the ssh command is similar to the rsh command.

15+ RPM Commands with Examples in Linux